I wish.
One of the side-effects of chemotherapy is constipation. Not a pleasant topic, or situation.
Hey, that rhymes; I could write a song....
But no, I'll confine my creative output to this blog, and hope my body output gets moved to move too.
My sister from Calgary just phoned to check in and make sure the chemo didn't "knock the poop out of me", but I told her "Oh, would that it had!"

I will sit here in the bathroom, computer on my lap, phone by my side, foot roller running back and forth over those large intestine meridians, until I get some results.
And meanwhile, the photo below might amuse, or turn you off, but one must have a sense of humour, mustn't one? 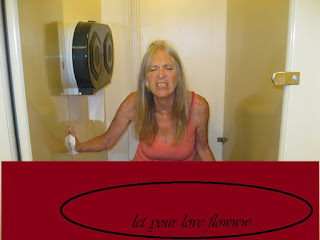 A few years back, I was getting ready for a gig up in Minden, and I and my granddaughter, staying with me at the time, and put to work later on the door for the performance, were just goofin' around with fake poo fotos, which made us giggle a lot. Personally, I am easily amused.

Except right now, as the Queen says, we are not.
******************************************************
The chocolate choo-choo never came by, so after a valiant three hours, and a few phone calls and projects and books from the throne, I gave up. But they had put the fear of God into me at the Princess Margaret Hospital, saying that if nothing moves for two days, then the danger of a bowel obstruction looms.
Since that time had passed, I phoned the doctors there, and they told me I should go to Toronto General Emergency and make sure the obstruction was not happening.
Downtown hospital. Last day before a long weekend. A few loony guys and an endless parade of other people in varying stages of discomfort and pain, most of whom were seen ahead of me. Then  eight hours later, at 1AM, I am pronounced obstruction-free, just full of shit. Oh, and cancer.

Looks like a big jobbie for for SuperZoe.  I will be stepping up to be boss lady.
What a day this has been! What a rare mood I'm in! Why, it's almost like being in love.

The love goes to my son, who has been ferrying me around the city through these last few weeks, and now tonight into the wee hours. Thank you, figlio mio.

Posted by bluesinger at 1:20 PM