Came home from Mexico Thursday evening, March 21, 2019. Friday morning called the doctor, made an appointment for 2:30pm. Doctor saw my condition, and made an appointment for an ultrasound at Women's College Hospital. By 3:30 I had it, and that test resulted in a recommendation for a CT scan, also done that day. I got home from my 2:30 appointment at about 8:30pm
The weekend meant waiting, plus an art show and good friend making me dinner, but Monday I had blood tests, which, when passed on, resulted in an appointment at the cancer hospital on Wednesday, where six years ago I sang a few times to entertain patients and family members.
Little ironies of life.

There I learned all about the horror show that had so suddenly become my life, although in truth the strangeness in my belly, which I experienced as deadness, and disconnectedness, had been ongoing, when I figured it out, for a couple of years, It did not become so apparently wrong until the week before I returned to Toronto. At that point, i knew I had to consult the doctor.
My son accompanied me, thank God, and thank him, to the cancer centre. Everyone was very nice and very helpful and very efficient, but that night I couldn't sleep. I tried to make my head spin even faster, on purpose, to centrifuge my thoughts out of my brain, but it was pretty useless. My brain is, always has been, too fast for me, and one giant step ahead, usually with negativity.

I had gone through some old diaries, thinking to throw them out, and spare the world after my looming death. I don't know if it was their contents that had disturbed my peace of mind to the point of no sleep, but it was shocking and utterly distressing to read them, - and I read only a page here and there, out of a mountain of notebooks - to see the vile and all-consuming self-hate that I lived with for so many years. It was shocking and saddening. I lived and functioned, I guess, on a certain level, but inside, I was absolutely trapped and alone. I had no one with whom I could share my feelings - I never had, all the years I had been growing up; I never knew anything else but to suffer and keep it to myself. The pages are awful - bleak and black, and relentless in self-criticism, doubt, and guilt over everything I thought and did. I feel such sorrow for the person I was, and also such a loss for the wasted years.
Fortunately, my life did change at some point, although not in a real discernible way for a number of years. I mean, I didn't stop my endless diatribes and insane spirals for a long time, although outwardly, I did find people and activities that slowly reduced and finally eliminated my habits of being lost within my own head, with no one to talk to.
Therapy, once past the stupid and abusive therapist sleeping with me, then massage therapy, for and later, by me, then music. They made the difference. But friends gave me the most, once I learned to open up a bit, and they helped me to let myself out and let other parts of me live, besides the child trapped in the evil grasp of whatever demon I had absorbed. It's embarrassing now to see what I was.

Likewise humbling. I am not always happy now, no one is all the time, but I have had a lot of joy, and opportunities to express myself and to be creative. I sought out those things, I guess, in my blind way, screaming and repeating my misery over and over again; writing, scribbling thoughts and poems that had no hope or light, but which somehow helped me throw off, if only temporarily, the emotions that were destroying me. Recording all my dreams, looking for guidance.

I don't know, now, how I survived, and I feel ashamed of my pathetic and desperate beginnings.

But I did survive, and feel like I must now express gratitude to all the people or chance encounters, or perhaps the changing times, maybe even some stupid sitcoms on TV, that somehow taught me. I especially am grateful for music. I was lifted out of the mire, mire maybe of my own confused making, but I had never been taught otherwise, and I don't care any more. I was lifted out, I survived, I did change somehow.
And now I'm pregnant with death, - sat, or laid down, on a conveyor belt of unknown destination. I probably have cancer; it's not been confirmed, but the fast-tracking of all my appointments has been ominous; preparatory for the worst.

The irony of it all: girl overcomes cancer of the spirit, and succumbs to the destiny of the failing body. Maybe that was the lesson of this life. Maybe it's precisely as ordained. Job done. 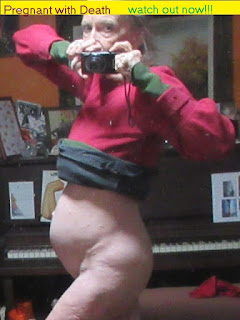 Posted by bluesinger at 10:10 AM No comments:

This is a gig I did in Mexico last Friday, March 15, with Steve O'Connor, a wonderful guitarist.
Will attempt to upload a film...
Well, it won't upload the main one, so this is just one song.


Posted by bluesinger at 3:09 PM No comments:

YOU ARE MY SUNSHINE

My only sunshine. you make me happy  - when I can see you. I am in sunny Mexico where I can actually see the sun, feel the warmth, relax my shoulders from around my ears, and BREATHE!!! again. Where I can walk unimpeded by mountains of frozen slush and ice.
I'm lucky, I know, and very thankful for being here, listening once again to Mexican music played loudly, and the ever-present roosters and dogs.

There's also the ocean, pounding and roaring relentlessly, where I rejoice and stretch, and sing my song "The Rolling Ocean" (written on this beach in 2013, and on my soon-to-be-released CD). There's food and colour, and other people walking past you and saying "Hola" to everyone they meet.
Just can't help feeling good....

So today, I remember watching the second hand on my watch go by, and counting every once in a while, 1-10. That was fun.
Or doing some little tightening exercises while sitting on the sand, or straightening my shoulders so they're not curved around me like the Toronto City Hall.
Or lying back, listening to birds, and reading Maya Angelou's book "I Know Why The Caged Bird Sings". (and I know why the uncaged bird sings, when I hear the sweet real-tweet sounds). I read a line that makes me weep, quoting a woman in Angelou's story who tells the young Maya that "Words mean more than what is set down on paper. It takes the human voice to infuse them with the shades of deeper meaning." I weep because it's so good to hear someone else confirm, albeit after the fact, what I try to do with the lyrics of my songs. It's also what a poet is going to be doing when she recites two of my songs at the benefit I'm organizing for May 5, 2010. More about that later.

But here, in the sunshine, undoing is a more precise description of what I'm doing.

Last night I was at the beach at sunset where it was just like this video I took a few years back. Time doesn't exist, people don't change, in the everlasting glory of the ocean's playground, and in the light of my lovely friend, sunshine.

Posted by bluesinger at 2:53 PM No comments: