Many years ago, when I was young, I met a man.  Very gorgeous he was - a tall, blond Swede transported to Canada, and fitting in nicely, with a spot on a paneled television show, his own business of antiques he collected and sold in a downtown shop, plus his career of racing and collecting cars.  A bright and interesting light on the male scene - and he was interested in me, what a surprise.  I was smitten, and a willing victim to his charm.  He lived in an old Victorian house in Cabbagetown, in the east end of Toronto, (later bought by Lorne Michaels just before he went off to New York city and started Saturday Night Live).  It was around the corner from where I and my 3-year-old son shared a house with two of my co-workers.

Besides being beautiful and intelligent, he was unfortunately a big, fat liar. He wooed me, told me he loved me; gave me a key to his house.  I used it one night - all unplanned (the fateful surprise visit). When he wasn't home, I waited; amused myself reading perhaps; then as the hours passed, I finally got into his bed and waited more.  By two AM, when he still wasn't home, I opened the drawer of a night table out of boredom - and found a letter he was writing to his former lover.  Full of love and longing, he was, wanting to be with her, to get back together.  A touching tale.

I left then, my trust destroyed, my pride keeping me away from him for a while, but that was followed by the usual after-period of on-again, off-again attempts to fix things.  It never worked.  he kept lying, trying to convince himself, perhaps, and it was a doomed relationship, and a painful growing for me, over a long time, until I finally smartened up and decided to write to his old girlfriend, who by that time had heard about me.  She responded to my letter eagerly, a very lively woman with many artistic talents, and we traded missives and stories often, by-passing the silly man, and enjoying a new friendship.  She was a fun spirit; I could see why he liked her, and also why she was done with him.  (I had also received a phone call once from his ex-wife, who had re-married, warning me against him).

Eventually, my new friend invited me and my son to visit her in the country, and we did so, and repeated the experience on other occasions.  On one of our trips to her house, shared with her new man, her sister, and her mother, she drew this portrait (below) of me.  I found it last year and framed it, only noticing as I did so, that the date of the framing was forty-two years to the day from when she had done the work.  This young me gazes out from my wall now, and silently challenges me daily: "Well, what are you making of yourself?  What have you learned/accomplished/offered/created lately?"  The young, naive me that I was looks much more knowing and confident that I felt then, and I must assume that Sybil, the artist, ex-lover of my ex-lover, saw and captured a different, future me. Wherever she is now, I thank her for this reminder of those days, pain and fun, and all, and for her example to me of an independent, fully-alive woman. 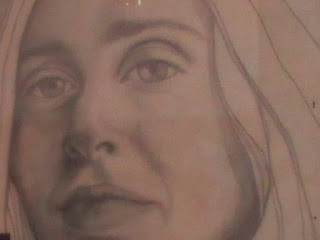 Posted by bluesinger at 8:44 AM No comments:

It is raining big time, and the whole county is grateful - having had a total fire ban because of the dry conditions.  Here are some photos of my new abode:


And here's the reigning seniors' cribbage champion of Alberta, here in Ontario to whup them Eastern asses, and take the crown for the country. She visited with daughter Cheryl the other day.

A SUMMER TO REMEMBER & SINGING IN THE PARK

Why, you arsk?
Just been crazy busy, and full of changes, and saying good-bye to things and places, and oh yes, a lot of heavy lifting.

so last post had the organ going to its new home; next was the old cast iron stove on its way.  some pics - rob and bob after loading, 'miss canada' ready to roll, and there she goes, rolling down the lane.
PICTURES OF OUR GIG AT HALIBURTON'S HEAD LAKE PARK ARE BELOW THESE: 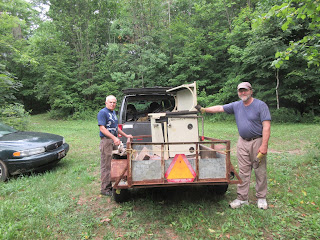 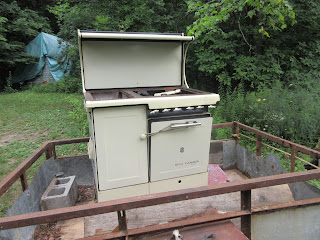 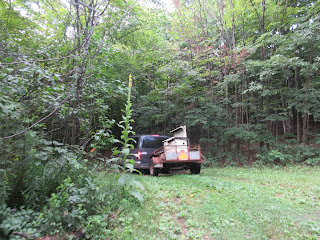 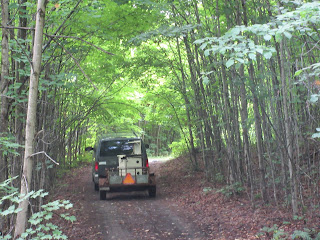 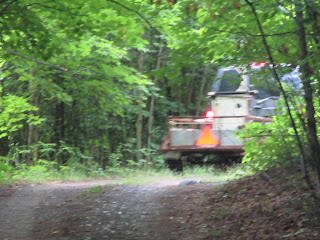 and here are some of the haliburton head lake park gig.  the band, and the women's chorus before the performance,  a couple of shots of us in action; the audience on the lawn in the sunset; then meself in the bar after it was all over:


finally, here's a shot of my new home with brother paul visiting.  teeny bedroom, teenier bathroom, but the TV is tres big. 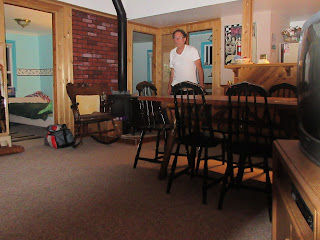 Posted by bluesinger at 9:27 AM No comments: