BY THE BLUE DANUBE

It was one of the first piano pieces I learned a hundred years ago when I was young. Tonight on the way into Budapest I saw it for real, just before dark. Talking about the Danube river and Strauss's famous waltz. After arriving at my lodgings, a villa built by a Count who was Prime Minister in the early 1900's, I ventured down unknown streets to a main drag, trying in vain to find food. I have realized, as a friend of a few years knew, that I get very cranky when hungry. Didn't have the local currency, which was a problem, (why can't they use euros?) and banks were closed. Would be closed until Monday.
Bad news.
Then good news. I read the public transport sign out of boredom and no place to go, and discovered that I'm old enough to ride for free. Suddenly the city improved a lot.
Then I asked in what looked like a fancy restaurant, and found out they would accept the euro. So hallelujah, I could eat. They even had live music.
Good news that turned to not so good, because they played songs that I sing, and it made me wish I was at the Gate, performing with the trio.
Oh well. The food was good. Walked back and didn't see a soul in the quiet. I miss the people and street life of Rome already. It suited me better, and was warmer too.
............
But hey, now it's a brand new day, and I explored a lot of the city, (although sometimes I feel as if I'm simply walking and eating, and then walking and eating some more, but that's actually quite fine).
And now that I found out how to post pictures, (on my last day in Rome) I'll show you a bit of Budapest, starting with the famous Gellert spa, then the ceiling of the Opera House, then part of an exhibition called "Shoe Magic" at the museum, next my feet taking a rest by a little pond, then the astonishing St. Stephen's Basilica, which can hold 8,000 worshippers, then a lovely bride about to change her life there, next the view from the Matthias church, overlooking the river and rooftops, me in one of the towers, two gorgeous girls on parents' shoulders, and the beginning sunset. I later sang spontaneously alongside a violinist at an outdoor cafe, but that's a video. I'll see if I can post it later. 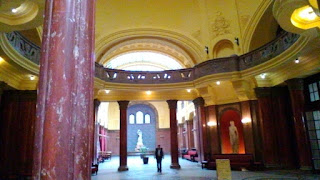 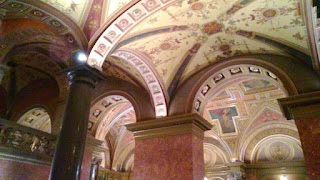 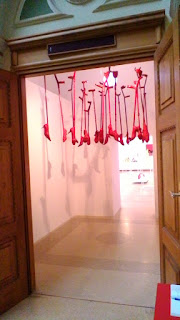 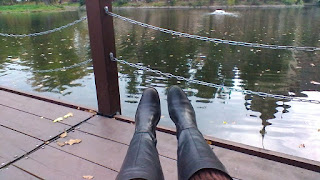 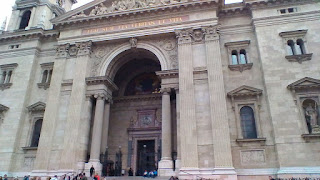 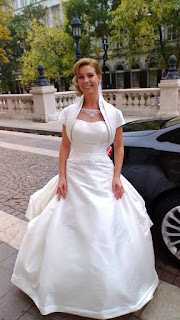 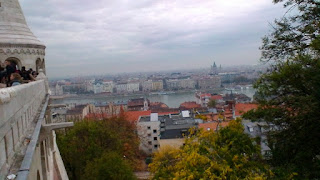 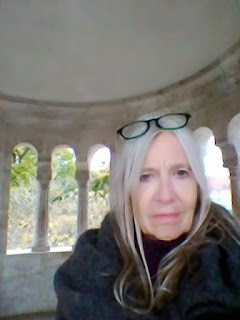 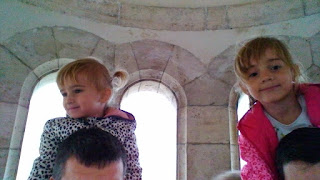 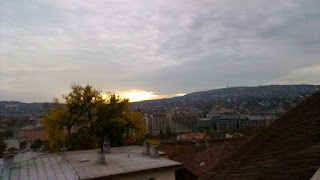 Posted by bluesinger at 11:45 AM No comments:

Will be on the plane soon. Love Rome. So much LIFE!! My last night and dinner, and earlier that day. Do I look Italian in that one? 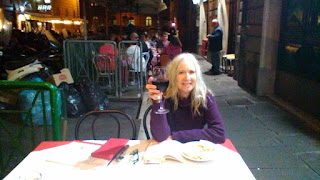 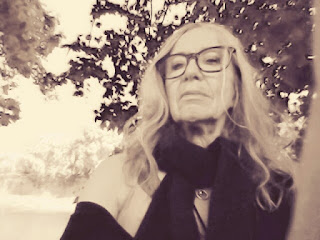 Posted by bluesinger at 1:48 AM No comments:

Well, I'll try to recap, with all the high points only: hmmmm, what were they, now?
Seems like I've been here in Rome all my life. Some bells just rang out ave ave ave Maria - so many reminders of my Catholic past...including a young woman I met last night outside the Vatican. She talked a lot about the confessor she sees all the time - sort of like a personal trainer; she makes her confession a lot, while I, sinner, have done away with that old habit. I was drinking my beer, having worn myself out trying to find a museum dedicated to Augustus, then getting to the pope's place too late.
You know, it's just too hard and time-consuming to compose anything on this one-finger tablet. I can type a thousand times faster. So screw this. I'll have to write all my adventures later. Can't post pics, either. These things are useless. Emergency use only.
Arrividerci.

Posted by bluesinger at 11:19 AM No comments:

Sono qua...I'm here, in Italy, trying to see if I can put up pics from a tablet.  Let's go...
Non funziona. She no work.  Che schifo!
Arrividerci.

Posted by bluesinger at 10:01 AM No comments:

I do my morning exercises in the great outdoors, at least before the winter comes, and as I rolled around on my mat Sunday morning, trying to stretch and tone my body, listening to Joe Turner, Billie Holiday and John Lee Hooker, I watched the leaves of the trees up above me, swaying in the breeze. Billie sang: "Please Don't Talk About Me When I'm Gone", which got me to thinking about relationships I have had, particularly as this weekend marks an anniversary (my wedding day to one man, which I called off), and the birthday of another. Both men were Libras, the astrological sign of Balance, and both are not in my life anymore, but I hope that we all have attained some kind of balance; I believe that we do learn from every relationship, even if it doesn't last forever, and I wish them both well, the first and last loves separated by so many years.
And I, as I wrote many years ago in my diary, go on my way alone. It's hard, and sometimes the hours are long, but it's also, (I guess) what I want. It's the "better prospect" that someone said I was always searching for, although he was not being complimentary; he meant it as an accusation, an infidelity when I was with him. A nasty remark, one born of angry insecurity, I think. In any case, it wasn't true in the sense he meant it. I never seek men; mainly, I suppose, because they have always come to me. I'm grateful for their love and tenderness, but I think I learned early in life that I had a different path. Any relationship is constraining, and men in particular want a woman to be a certain way. I'm not any fixed way, and I don't want to be. I despise the ownership of men.
Yesterday, in the desperation of one of those long hours of my life, staring into space in my living room, I dragged myself out to hear some music downtown. I sat on a bar stool by myself and stared at musicians instead, a good band which got me bouncing to their tunes. A young woman came in and sat on the stool next to me, and we both watched in respectful silence. I was thinking of the bar that used to be a few doors down, now demolished, where I had gone by myself forty years earlier, and where I began a love affair with the musician who was performing there, and who had come over to my table, seeking company. I silently cheered the woman beside me for going out on her own too; I thought, 'she looks about the age I was then'. When I finally spoke to her later, she was delightful; good-looking and cool, but not in the way that people try to be; she simply had a good sense of herself. She came from a country in Europe that I'm going to visit soon, and we ended up trading emails and phone numbers, and especially, laughing a lot together. She was precisely the age I had been at the old Bourbon Street bar, as I had guessed, and she represented for me, by her attitude and spunk and artistic nature, just the kind of woman that I think women should be. We both went home alone, but much cheered. That's the "better prospect" that I know is out there, and which gives me heart.

I recently found this poem that I had copied a long time ago; it was written in 1896 by the English poet Ernest Dowson, and is timely all the time:

They are not long, the weeping and the laughter,
Love and desire and hate.
I think they have no portion is us after
We pass the gate.

They are not long, the days of wine and roses,
Out of a misty dream.
Our path emerges for a while, then closes
Within a dream.

Posted by bluesinger at 7:16 PM No comments:

RED ON THE ROAD

So, the summer ended with heat and sun, which never came when it should have, but then, it seems that nothing ever will again, this being the world it is, and people being as crazed as they are.
Fortunately, in my little world, which is not newsworthy to anyone but myself and my friends, the summer was still warm, and the season ended with music, which always soothes and excites at the same time, bringing our brains to the state in which I believe they were meant to be, which is to say, peaceful and loving, dare I say, happy. The state eludes us so often.
I was lucky enough to sing, accompanied by two extraordinary musicians, and to have an audience that appreciated our offerings.  As we say in the biz, "quality, not quantity". And the whole evening was quality. People boogied!
Got some very nice feedback:

1.A stunning evening of jazz standards and originals at Minden Legion last night. The Jumpin' Jazz Trio led by Zoe Chilco on vocals. A veritable clinic on how its done by Mike Allen on guitar and Ron Johnston on bass, just so good. A big thanks for a fine musical evening
2.Right on. It was a pleasure to see and hear such accomplished musicians. And Zoe's vocals complemented their playing perfectly. Those who did not attend missed out on some of the greatest Jazz heard in these parts in many a year
3. You looks so great in that fabulous dress designed/made by Laura Trach! Love you both!
4.  Such a great dress. Such a great night.

Here are some pictures, one of which i have dubbed "queeing the bean", -  a reference to the Muppets' very funny show "The Frog Prince".  You should look it up. The dress I wore (and subsequently bought) was designed by an artist of the area and is going to travel with me next week on my European adventure. I'm calling it "The Red Dress Tour".


Posted by bluesinger at 1:55 PM No comments: