It's been a bad week for me – sick (again!!), which is very unusual for my normally vibrant and healthy self. Guess i've been lucky. But then i just didn't feel 100%, ya know?, and that progressed to out and out lousy, and bedridden, even. My first line of defence is always sleep, so i gave in, and boy, did i sleep a lot. All day and all night too. Sometimes i think this is how life should be – I tend to agree with Fran Lebowitz, who said that life is something you do when you can't sleep.
But seriously, folks, it's been a trip; one i hope is over soon.

And in the meantime, i've gotten so far behind in my reporting...
I did attend the illustrious Maple Blues Awards, January 21 - Canada's premier blues awards show (i think it's the only one), and it was, in fact, illustrious. A great show with a lot of great performers, and a slick, but not too slick, presentation. I could have done without the reminder of the environmentally unconscious, and social-program-and-arts-funds-cutting person who runs our federal government, but the wife seems ok, even if she has the misfortune of her marriage. As long as no one starts to meddle with the music, or worse, suck up to the wrong 'powers'. OK, that's probably cryptic enough, for anyone who doesn't know the facts, and i'll leave my ranting at that. Because it was fun to mingle and schmooze, and bop to the blues, and to top that, for me personally, i had some lovely comments on my fashion sense (They should have seen me this week, in my jammies and big fat sweater and hoser's hat). But i digress. Three – not one, not two, but three of the reigning blues divas of Canada all said to me individually that they loved my hat. (Why, this old thing?). And I know, it's just a hat, (stop!! it'll go to my head!), but I rather enjoyed it, and accepted it gratefully, even though it will never take the place of actually being up there on stage and singing some of my songs, or maybe once, just once, getting -- oh oh, i'm ranting again. Sorry. Back to the hat, which you can see for yourselves in the photos here. some of the famous many who attended –

Chris Whiteley's partner, singer Diana Braithwaite, and his son Jesse, with yours truly; 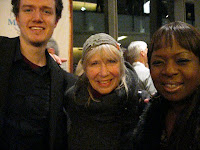 Johnny Max getting high on the crowds; 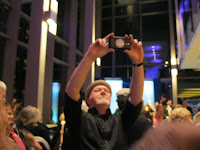 meself and David Barnard, co-founder of the Blues Society and director of the awards show 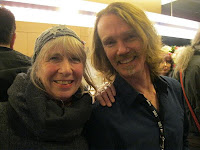 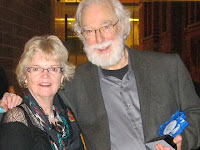 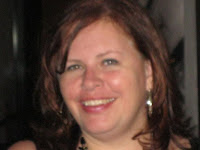 above:
Raoul Bhaneja, host of the event with a couple of fans
Suzie Vinnick, best female vocalist, acoustic act

It's probably where I picked up all the people germs.......
Posted by bluesinger at 2:26 PM No comments:

i have a new video on youtube, which has samples of most of the tracks on my new CD; also includes some blab from me, and some interesting (!) hairdos.
http://youtu.be/rxOZhS2v6zM
will get you there. 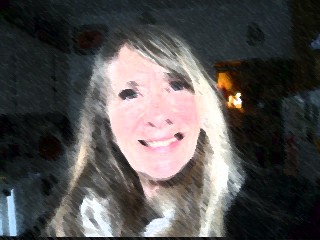 here's a pic from the video
Happy January
Posted by bluesinger at 11:41 AM No comments: