my son and me at work 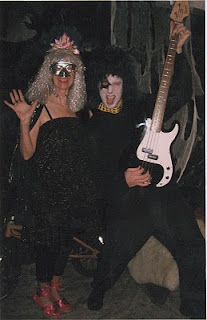 I mentioned him the other day, and his invaluable help in putting together a promotional video for the show I have called "Zootcase" (zootcase2010.blogspot.com)

Thought you'd want to see our modus operandi.
Posted by bluesinger at 10:06 AM No comments: 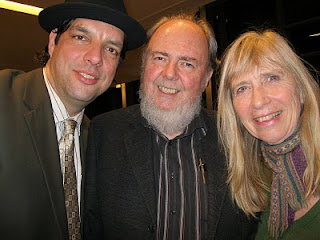 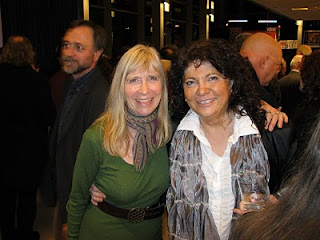 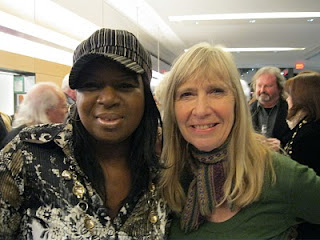 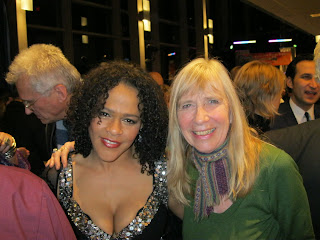 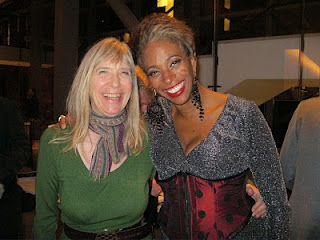 How could I? Just been too crazy busy, I guess. I forgot to post the photos from the Maple Blues Awards night, held mid-way through January. All the beautiful blues people were there, and it was fun, as always.

So to share the evening with you a bit, here are some of the amazingly talented and gorgeous performers who were on stage, singing and knocking us all out. You'll notice that all the women are exceptionally fancy and glamorous in their attire, while I look quite homespun and fetching, je crois, in my simple cotton sweater, and that woolen artisan's scarf that I've had for 3 hundred years. Handmade lasts.

The women (from the bottom, going up)are Shakura S'aida, Dawn Tyler Watson, Diana Braithwaite, and Rita Chiarelli. The one photo with guys shows Tom Bono, drummer, and Brian Blain, singer and songwriter, and of course, moi in the ever-present green.
Posted by bluesinger at 9:49 AM No comments:

what to do when you're really bored... 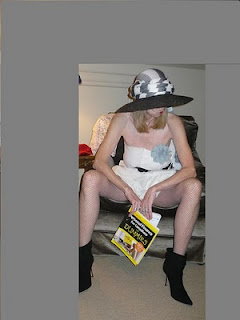 which seems to be happening to me a lot, lately. i mean, it's winter - so i don't really want to go schlepping around with a lot of music equipment, and besides, i'm supposed to be woodshedding to become formidable on the piano. truth is, i don't last very long at that work. (note to would-be's: do not work alone; you can distract yourself with anything, and i mean ANYTHING).

today, i actually decided to take a teaching job, out of desperation (for money, and also to escape my procrastinating self). and really, the gods are against me; the first period was a 'prep', which means i have no students. lots of time to familiarize myself with the curriculum, if the absent teacher had left one. second period, during which no one showed up, is now over and i just heard the recess bell.
i should not complain, i know, not to mention advertise, this situation, but it doesn't happen very often. so, after preparing as much as i could for the classes, i am now applying myself to boring anyone who lands on this site.
i'll put some new pictures up later, when i get back at another fast computer.

in fact, i have a couple of gigs coming up, and of course, the ever-present piano work, as well as some 'tours' i would like to arrange for the summer. and on the weekend, i'll be working on the zootcase fundraising/advertising video that my son is very kindly putting his professional talents to. (bad sentence for a teacher, i know). oh yes, and some videos that i'm having prepared for youtube.

i'm trying to convince myself that i am busy, and doing worthwhile stuff. it's hard without money. i would be recording new songs if i had some of that commodity.

well, enough fascinatin' rhythm for now; i've just got too much to do....
Posted by bluesinger at 11:03 AM No comments:

and they say digital is faster..... 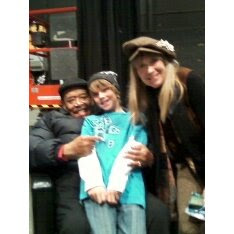 well, it sure wasn't for me.
i was lucky enough to see the famous blues harp man, James Cotton, back in December, and my young friend Jack had his cell phone, so we got someone to immortalize us all together.
then the problems began, trying to get the photo onto a computer. i won't bore you, but it took forever.
and now, finally, here it is.
Posted by bluesinger at 11:29 AM No comments: 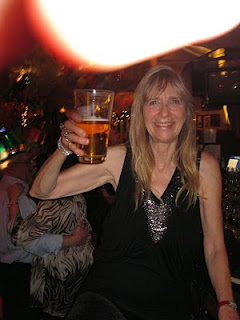 to everyone- with wishes for a very healthy and prosperous 365 days to come.

all is well where i am currently living - not very wintery, but that's ok; no snow to shovel. it's been hell on snow in a lot of other locations.

and i am trying to discipline myself to do more work on the piano - trying to get those fingers moving just a little faster on the scales, and attempting to learn how to invent in improvisation. yah, that's what i'm trying to try to try. translation: i procrastinate a lot.

so here's a photo or two from the hilarity of the last night of the year. although we weren't gigging, like we were in 2009 on that evening, still, it was fun to be one of the crazy revellers.
Posted by bluesinger at 6:08 PM No comments: