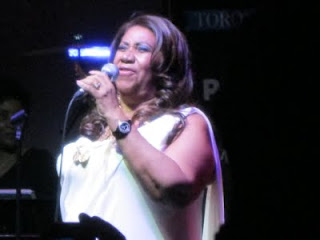 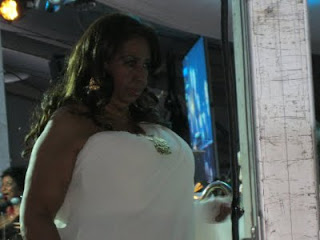 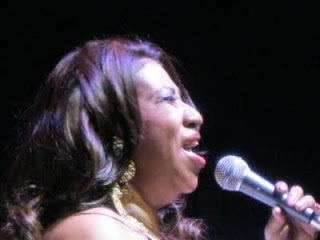 all afternoon i'd been thinking, "this is the stupidest thing i've ever done". racing downtown mid-afternoon, lining up with millions to get the wrist-band, killing four hours before showtime with nothing to do. i wander. i eat. the garlic/ginger chicken with rice and veg that i brought from home was fabulous; the french fries i bought later are shit. when they finally let us in the tent, there's no seating - we are cattle, jammed up in front of the stage. again: "this is the stupidest....". but the surrounding desperadoes are friendly - the excitement is contagious - sort of. when i say "I'm not going to last", my young neighbour earnestly says, "you can lean on me". but i'm not weak, i'm just pissed off. two more hours to wait! so i decide to hell with it; i break away from my secure spot, and meander in the tent. i find friends, and before i can leave and go home, the opening act comes on. a great band, winding us up for the big show. and before long, there they are: orchestra, conductor, accompanist, back-up singers, - all assembling, then playing, and then.....huge roar from the audience ---- she appears.

and there i go - scrambling, squeezing, and insinuating my way right up inside the barriers, to the steps of the stage. not so stupid, after all. the pulsating and enormous mob of adoring fans are to my right (with thousands more outside the tent and on the street beyond). the 23-piece orchestra and the gigantic screen are on my left, and the iconic figure of Aretha Franklin is just a few feet in front of me. a massive presence dressed in white; a ship on stage; bride of the rhythmy blues; she floats my way, and looks directly down at me and my little camera. she looks, and in that moment i know: i have received, directly and indubitably, the power. the queen of soul has handed me the sceptre of song; infused me, in silent and secret signal, with her legacy. looming, large, and loving, she looks directly down at me, and i miss the shot, of course, being required by the laws of music and mystery to stop - to simply acknowledge. what is a photo op, after all, in the face of real, live, consuming essence of soul?
j'accepte. i capture some other moments of her greatness, in the next few moments, then slither off the stage and back to my place in the crowd, another faceless fan, with a futile fantasy. oh, i will sing the songs, as i have often done before, and especially now, with that awareness of close-to-greatness with me in each note. but i know, - of course i do, - that my wee voice could never come close to her legendary sound. that's OK. i will aspire, and remember, and carry the sceptre of song as i go, and hope that i can express just a fraction of that magnificent soul. no 23-piece orchestra with me, but i will sing - like a natural woman.
Posted by bluesinger at 6:15 PM No comments: 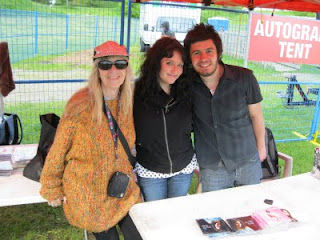 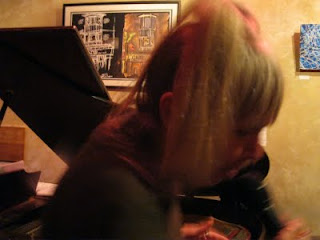 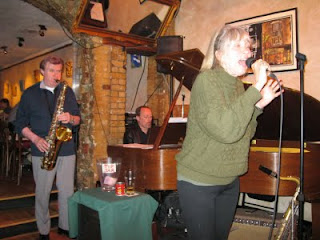 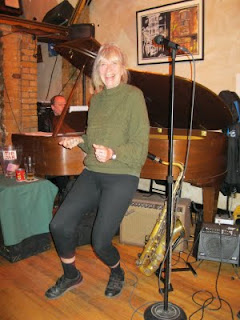 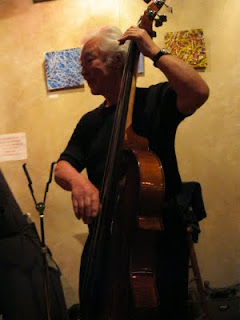 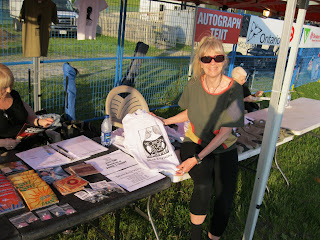 a little blues fest over the weekend; i helped out at the toronto blues society table, and also chatted with Gina Sicilia, singer from the US of A, whose singing i quite like. i'm here with herself and her guitar player Dave Gross.
and some pics from another gig at Gate 403 in T.O., including one of myself just dancin' and having a whale of a time. (as they say in Quebec: "trou de c__, qu'on s'amuse"). the gig featured Julian Yarrow on piano, Ron Johnston on bass, and John Deehan on sax, and a friend of mine from many years, artist Sam Miya sat in on bass for a tune too.

Hope everyone is having a very musical springtime.
Posted by bluesinger at 10:48 AM No comments: