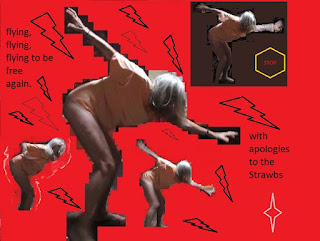 I was so mad, eh?  I mean....what the blankety-blank goes on when you can't even walk down the street? when you can't trust anything? - not the ground you walk on, not even the feet that carry you. When you can't simply "put all your troubles in your old kit bag, and smile smile smile" while you amble along - or hurry along - whatever. The point is: you can't relax for one little second, lest the gods, or fate, or some stupid little pointy-toed shoe that you never usually wear, catches on a broken bit of sidewalk sticking up above what should have been a flat, smooth surface.  Thanks, Toronto, for not keeping your public walkways in good repair. But why am I wasting my time, lowering myself (literally, as you will see) to sarcasm and insincere thanks? There are real thanks due somewhere, to someone, or something. To heaven?

Perhaps. It was a miracle, after all. An ordinary, out-of-the-ordinary miracle on Victoria Park, near Danforth and the infamous Shoppers' World.

OK, so I tripped, and began to fall, but only began, moving in a series of stop-action, slow-motion stills, going from sudden lurch forward to half-bend, arms-thrown-out-in-front, to overall wobble-with-one-arm-circling-back, to the miracle: to myself caught in the timeless battle between heaven and earth, - body splayed in a prone position, and hanging there, as if by strings from above, like a Gulliverian suspension bridge, just THIS close to the ground. And then the strings suddenly cut, gravity sucking me down in victory, and my body jerked forward once again, upper limbs flailing out of the airplane position; plane bound in free-fall for the ground, but then once again swooped up and seemingly cradled by an invisible etheric force, and my body, delayed from the inevitable crash, is guided and lifted to a standing position, sputtering with evil curses, but upright.

Oh, I swore long and loud, and a-plenty. A frightening, bone-threatening, ungainly and embarrassing acrobatic act performed publicly will unleash anger and a streak of blue that you never knew you had in you. You tremble and stomp at the same time; you feel betrayed but fiercely determined, and finally you walk away, seething, searching for the idiot with a cell phone that might have preserved the shame. But as I walked, I couldn't help thinking back on the incident, trying to reconstruct the few minutes that the almost-fall had actually taken. I couldn't, but I had to admit that something strange had occurred, that by all physical laws, I should have been smashed onto the concrete, with the fracture clinic awaiting my arrival. But something weird had changed the natural course of events. Was it my own mind, screaming NO!!! and willing myself into a resistance that literally pulled me back? Or was it an intervention from unknown spirits - souls who have known me perhaps, maybe even loved me, but who were now gone from this life, watching from the world beyond? Did someone reach down and grab me, holding me until my poor brain could scramble to receive my own propriocentric transmissions, correct my motor functions, and finally restore my balance? I will never know. However, after the anger and the thinking, I was humbled; shocked and awed for sure, but then simply the witness to my own amazing experience, an unbelieving believer in the unexplained. I walk, therefore I talk: Gracias a la vida.  (Maybe it was just the greens I've been taking lately - a super-Popeye response, you know?)

Posted by bluesinger at 8:53 AM No comments:

WRITING FOR A LIVING

It's barely finished - the rough draft, that is, but oh, mama is so proud of her new baby.  I have written before, - 'way back in the early days, and before all the music got a serious effort - but recently I decided to write the book (It might only be a novelette) that had been simmering for a while. It's done, except for the chapter on Hungary, which will be completed after I visit there in the fall.
And now it's in the 'ask your friends to read it' stage, the author relegated to the waiting room in the grand edifice of public opinion.
Will I lose my friends?  Will I hear the oh-so-dispiriting "it was very nice" comment.  Kill me first, please.
What to do now is the question.  I have thought of publishing companies, of course, and quickly brought myself back to reality, and the unlikelyhood of that.  You never know, but just to cover my covers, I have also thought of self-publishing, as that option is available for any old hack.  Then there's the podcast, which seems a good fit, since I have included musical choices for each chapter, and would like people to hear what I did in my head.
We will see.
﻿
Posted by bluesinger at 4:38 PM No comments: