I'm singing in Haliburton at the Arts and Crafts show this weekend, performing for the love of music, because I love music, you know, really I do, and it doesn't matter if I make money or not, because strangely enough, I don't eat, or have to pay rent, or gas, or taxes, or anything.  I'm just a singin' fool who somehow keeps singin' and bein' a fool, and livin' on love. Of music, of course.
As for the other kind of love, I've decided to burn cards sent to me in the foolish past,  proclaiming love for me, which wasn't love at all. Found a whole pile recently, and I need the space.
Burn, baby, burn.
Here's a recent picture of me surrounded by all by thoughts: 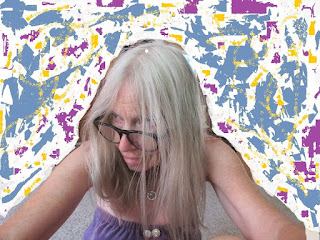 Posted by bluesinger at 1:12 PM No comments:

AS YEARS GO PASSING BY...


And what do I find with the passing years?  Well, the usual mix of depression with the state of affairs politcally and chaos and disaster throughout the world, along with some faint hope that things will work out, that people will actually start to use their brains and their good hearts, and also, there is some rejoicing for the ones who already are acting out the best interests of the common good, and who inspire all of us.


Personally, not much happening in my wee life.  I am trying to organize a benefit for a women's organization here in Toronto - for next year.  Also trying to get my volumes of writings into some kind of order, just in case I, you know, die, or something.  I want to have my legacy clear, such as it is, with me blathering about my ups and downs and observations I have made. Also working on a new CD, the most current 'last' one.
Sometimes I'm nasty too, and I want that as part of what I bequeath.  No sugar-sweetness all the time here, because after all, there are some things one ought to reject or respond to with anger.  I seem to favour a vitriolic tongue on occasion. Doesn't hurt to let the idiots know what they are.


Speaking of idiots: I face-posted this the other day, in response to the never-ending idiocy of the man they call president, in spite of the besmirchment he brings to the office.
He can't say anything because he has no vocabulary, or ability to articulate, or education, or understanding. Oh yes, and no manners, no sensitivity, no compassion, no experience in politics, no control over his emotions, no honesty...... He has no brains - however, he is very rich, and according to him, no one is better at anything than him. He has no grasp of what he is and how utterly pathetic he is to anyone who is capable of being a real human. Just my opinion.
I stand by that assessment.


And speaking of - actually no one is speaking about sex, but I will now.  It's almost one full year since I had my last love-tryst, and I have to say, now that the time has passed by so quickly, that the state of celibacy is something I would now call celebracy, since for me, it has been a gradual uncovering of a freedom to simply enjoy myself. One I would celebrate.  In youth, one is sort of driven by sex, and by the genes that want to live forever, and driven, not least of all, by the needs of the opposite sex too, who seize upon one's youth, inexperience, vulnerability, and energy.
No complaints, I lived with a verve for it all, heartaches notwithstanding, but now, I really want to enjoy still being beautiful, in a more mature (and sometimes only inner) way. I want to relax and laugh at myself and the jokes I make while talking to myself. I want to feel the love, as I did the other night down by Lake Ontario, of just walking, or watching lovers, young and old, or children and dogs, or the waves, or trees, or feeling the cool breeze.
Ya, sometimes I feel sorry for myself, but mostly, as years go passing by, I'm growing into a calmer, I'm-still-sexy, don't-interrupt-my-daydreams-or-plans kind of person, just thankful for my health and the friends I still have.


I found this picture recently, from not that long ago, but which I hardly recognize, what with the changes the passing years have wreaked on my poor, maturing visage. (both pics taken by my son). 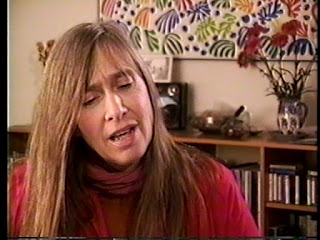 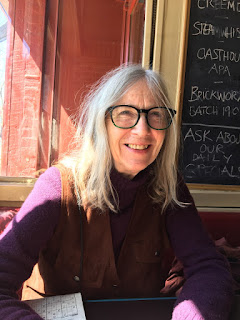 Posted by bluesinger at 11:26 AM No comments: