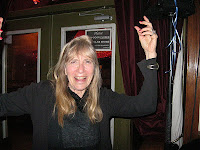 got a video here which features a sampling of some of my songs and also two standards. more will follow (one of some blues tunes of mine, and another later of some solo originals). in the meantime, hope everyone had a happy new year. here's a sample of the revelry i look to be experiencing by myself.

also, since i last wrote, the Maple Blues Awards night has happened - more revelry and congratulations there; lots of great musicians and friends to visit with, and the Blues with a Feeling award went, most deservedly, to Paul James. haven't seen him for 10 years, when we both attended the blues festival in Porquis Junction, Ont. (see my website photos for a pic)

Posted by bluesinger at 8:47 AM No comments: