Outside in the late afternoon in a sleepy Mexican town, I sit in my plastic chair, and listen to the quiet. Unlike other years, there is no blaring traditional music destroying any chance of thought or solitude. There are the leaves, rustling slightly in the wind. There is a bird repeating its whiny call over and over and over. Every once in a while, a nut of some kind drops from one of the trees, or I hear a dog in the distance. Mostly there's only the tap tap tap of the computer keyboard as I attempt to record the day's activities.
There is nothing active, only stillness.
This is a world removed, as dry as the hollowed out earth across from the front door of my small casita, where roots hang down in tangled disarray, the only sign of life occurring when a bigger gust of wind blows through the little lane way.
There are rocks and a bit of old rain or hose water sitting in a small dip of the ground's dirt. In fact, every part of the small street is dipping and uneven with waves of lumpy dirt and loose stones of every size, perfect for tripping you up, breaking bones or gashing skin. No one ever thinks, from year to year, of leveling the ground, or raking the rubble to the side, of planting flowers or creating some kind of delineating edge. A dry, dusty cliff of scrappy dirt lines the path, facing the cement houses on the other side. At the end of the road, garbage bins are knocked over and spilled by roving animals, their contents flattened into the dust.
The houses are painted here, cheery and bright, unlike on some streets, where the concrete blocks just remain, looking like an abandoned pile of unfinished construction, until you notice a light burning within, or a clothesline full of garments, or a child wandering outside. Here on the little dry lane, the homes present varied and colourful fronts, although the sense of artistry does not extend to outside the front door, where grey cement rises and falls like the topography of a very bad case of acne on the faces of several entrances. The lumps swell and slope in random patterns, as if bricklayers simply dropped clods of their mixtures like bread dough on a bent cooking sheet, turning their back on the preparatory work of smoothing the ground first, and then just walking away, forgetting their concoctions as they baked to solid forms in the hot sun. They are traps as well, defying you to walk without attention, to assume any amount of confidence in an even surface.
Walls with iron gratings in window openings rather than glass; inside and outside life that will erupt in a few hours and converge together in the intimacy of a gigantic, town-sized family gathering. Aromas from the several kitchens wafting through the air, and the occasional break-out of that really loud music as people relax to their personal form of therapy. All for one, one for all. Tables and chairs set out on streets under poles that support a thin tarp - pop-up restaurants of tacos and burritos, tradition of many years. Dogs and children everywhere as families make their after-dinner trek to the ocean for the wild and breathtaking canvas of the sunset, putting to rest another day.


This one has been quiet. 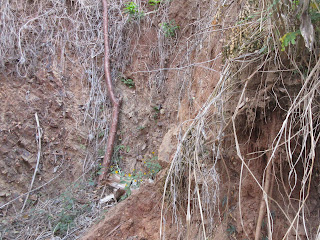 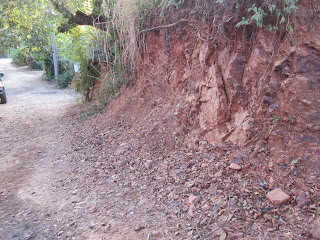 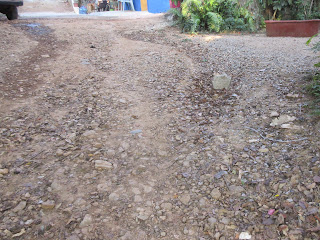 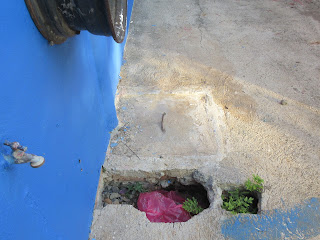 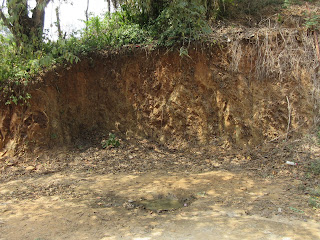 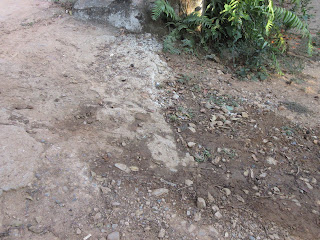 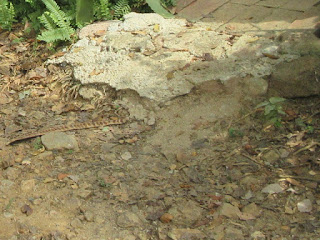 Posted by bluesinger at 7:59 AM