On the 25th anniversary of my mother's death, some recent thoughts, and me saying 'don't give up the fight': 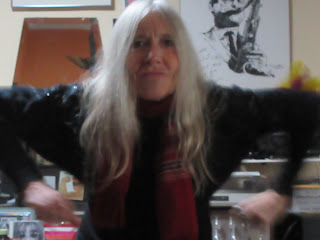 It's a funny thing, perception, so wildly varied, opposing even, depending on the person perceiving, his or her mood, or the people, experience, or stress in one's life. All those factors change what we think we see.
Take me, for example - please! Ha ha. Little joke there, based on that tired old humour that says a wife is a pain in the ass. Not humourous at all. I mean, if you don't like your wife, buddy, then get the f--- out of her life, and give her some peace, not to mention the opportunity to be with someone who appreciates her. What's that? It's just a joke? Yah, you guys are so funny, as you screw around, and dribble around the toilet. As you slaver over degrading porn.
Whoops! Got distracted by rampant attitudes, which are so hard to ignore, because they lessen the quality of the mind, heart, and soul of us all, affecting, and infecting us with spiritual pollution, just as chemical plants, car exhaust, and cigarette smokers pollute the air we have no choice but to breathe. Unthinking men, but greed and unkindness of the many weakens us too; I'll try to stay on track.
It's strange I should sound anti-male; I'm not at all. Why, some of my best friends.....
In fact I know a lot of wonderful men: intelligent, kind, and thoughtful, and able to make me laugh in a good way. But I get angry at the garbage that comes out of the ones who are not like that. So many of them are in positions of power. I'm veering again. It's strange I should sound anti-male because the whole purpose of this little essay was to talk about perception, and how knocked a-kilter my own has become since no longer having a 'significant-other' male in my life.
It ain't easy, I'll give myself that. A relationship of a decade and more, - now, that is significant, and can account for a good deal of your time, energy, and the need to have and express love and affection. I find that lately, and this is aggravated by having dropped out of two professions that would put me in contact with others, and am now working in very solitary fashion with music and writing, that, living singly, I talk to myself a lot. Recently, I have taken to doing it outside too, cursing bad weather or drivers on the streets, or simply having a nice conversation with moi. I figure everybody else is blathering details of their lives, unaware of the whole world, so I'll just look like one of them, headphones hidden. I can even laugh out loud at my own jokes as I go.
In general, however, I'm alone too much, and without the particular companionship that I had, and the common kind that most others have in their daily lives. So I wander in my house, keeping myself busy, talking, and working, but occasionally stopped by a glance at myself in the mirror. I have to say, I'm not inspired by me. Oh, I know I "clean up real good", as they say, but it's the general offering I make to myself that is less than stellar. And one day I realized that I needed to be looking at myself in his mirror, as I did in the past, which is to say, the pull-down mirror on the sun visor of his car, as we went somewhere, and I was in the passenger seat. For some reason, I was always surprised at my image in that mirror. I always seemed to look great; not only attractive, but young too; and happy. It was such an unexpected treat every time.
I guess what I'm saying is that somehow his feelings for me created an environment in which I liked myself, that someone loving you really does affect how you feel and therefore how you perceive. Love actually works. Duh. It helps and improves. Double duh. Maybe I'm double-"o" stoopid when it comes to love. Maybe that's why I am alone, even want to be alone, and ugly. Maybe I absorbed a lot of the misogyny as I grew up; the insistence that women were less and not deserving of being equal. I have always angrily rejected that lie intellectually, but emotionally, maybe it stuck somewhere.


What a dilemma. Where do I buy a mirror that works like the one in his car? Should I just make a vroom vroom sound every time I look in my own mirrors? How do I keep reminding myself that even though we had some lovely times, love seldom lasts forever; even though I wanted to move on, and am content and busy and have friends, and even though I consider my life to be privileged and good... I am simply missing him, and love. How do I remember that love is still there? Love that makes the world go 'round - that creates the world I want - that drives me somewhere instead of just into crazyland - that can surround me even when I'm rambling and echoing back my own drivel.
You know?