The Toronto Blues Society had its Christmas party last Saturday at Dora Keogh's bar, so I got there - and even had a little (crippled) dance with John Deehan, who had dropped in too, after another gig he had, to see some fellow musicians playing in the band - who were great, by the way - the Swingin' Blackjacks.  Randall Cook, who took the photo of myself and the blues women with Rita Chiarelli a few posts ago, had his camera there, and took this picture as we came off the dance floor.
I paid for the premature boogying later when my still-healing broken leg ached all night. But I don't care.  It was fun. 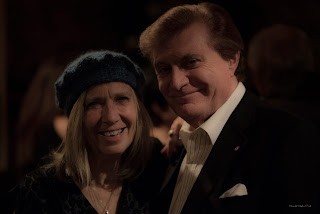 If you're on facebook, you can see other pics Randall took at:


And speaking of John Deehan, I don't think I ever posted this little clip (with two different songs) from when we played last October at Gate 403 in Toronto.  I still had the brace/cast on my leg at that time, and was just so excited to finally be out after the enforced home-bound period of recuperation.