WHO COULD ASK FOR ANYTHING MORE?

Sometimes I wonder just how fortunate one can get. Oh, I haven't won the lottery, or been discovered by a record label - nothing so mundane. But I do have a small park near my house where I've taken to running in the mornings - not on the pavement - that's jarring,  - but on the grass, where the wet seeps into my poorly-made Payless shoes (you get what you pay for).  Today was abnormally beautiful. I jumped and skipped and waved my arms up and about - not a regulation style, but much more freeing - and I counted off the 400 right/lefts that I do.  and the wind blew; and the tiny new green leaves danced; and the clouds scudded (as they do); and the birds twittered.  And moi? I rejoiced in it all, thankful for the chance to be part of it.  HAHAHA. I think I sang out a couple of high notes too, just to complete the image of a crazy person.

Well, it's my antidote to the craziness of that other world - the one inhabited by ugly radical islamist murderers, by evil governments, by over-rich CEO's, by idiotic male morons who think they're funny when they ambush female reporters on air, and by the other journalists making a "story" when there is none.  That last bit is about the Canadian hooha over Elizabeth May's speech.  The only sane voice in Canadian politics and she swears - oh my God!! - in public.  Big effin deal, guys.  There's crap out of all the other ministers' mouths every day.

But enough of that.  i've gotta get back to the robin's-egg-blue sky of this morning, and the wind, blowing away all that blather.

Here's me in my red glasses.  Am I cool yet?  And then Lake Ontario with an amazing colour, from a walk the other day. 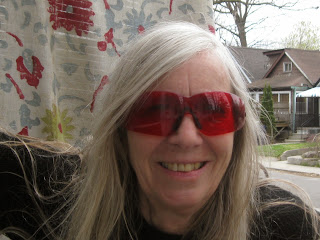 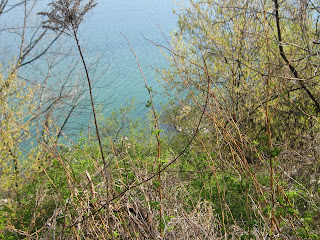