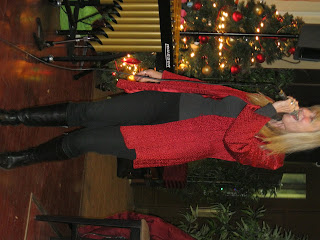 Better late than dead, ha ha. But don't make me laugh; it'll only start another coughing fit – you know the ones where you're about to throw up your metatarsals, and you're eyeballs are straining to leave your head. Not attractive. And it hurts, dammit. The poor ribs and throat can't take any more, but they must, mustn't they? Because you've gone and got SICK for the holidays. Day five now, and I'll tell you, I'm getting pretty sick of it. And even my picture is lying down.

So the card is late  – my cheery Christmas greeting of song, which you can't hear anyway, it's only a picture, and one now sullied by my belief that the night the picture was taken was the very one during which I picked up the germ. Why do people always want to kiss you their wishes? A little distance, please. The stars in the sky can travel millions of miles without losing their brilliance. Surely people can extend their greetings without enveloping you inside their nasty little diseases.

And I can't tell you the disappointment I felt when today, on day five of drinking my herbal teas and lying in first one room then another, and sleeping, sleeping, sleeping (thenks Gods for thet!). As I aimlessly wandered my small living quarters and passed by the front door, I saw the postman walking up my driveway. My heart leapt with excitement. But alas, my joy curled in on itself and became like the phlegm which tortures my lungs as I saw him take a right turn to my neighbour's door, and I stood there - alone again.

Food helps, and I have been lucky enough to have had some delivered, with love, to me. I think that was the best Christmas gift ever. And of course, I'm thankful that I still have my never-ending appetite.

The snows fell last night as I was reading in the armchair, surrounded by the glow of the Christmas lights, and the warmth of my electric blanket, the hot water bottle strapped onto my back, and more tea. So today I thought I might venture out into some fresh air (well, I know there's no such thing anymore, thanks to all the pollution, but we're speaking relatively, as Einstein suggested). I got the leggings and the big sheepskin coat and two (!) hats and a warm scarf and then had to lose most of my strength trying to push the snow out of the way of the screen door. By the time I struggled with the back gate, cleared a bit of a path so that one could open (the kick method), and got to the back shed, I was wheezing again, and then full-on horking in the snow with the mildew of that little hut. Almost died trying to lift the old tires off the shelf while holding my breath, and then it was all too much for me. I collapsed in the snow – willingly, because I knew I had to lie down again, and even enjoying it, after I got down there, with the flakes falling into my face, and the admittedly fresher air, not to mention the memories of childhood and carefree living getting a moment in my consciousness. But I got up before I fell asleep and died, and just as I did that I heard a voice, filled with alarm, asking “Are you alright?” And there was my neighbour, rushing into my yard, full of concern. And that just might be the second best Christmas gift – to know that I live on a street where people watch out for you, to know that care and love (and food) are definitely all out there. You just have to take the time to be still.

Which on reflection makes me think that's maybe why I got sick: I had forgotten how to receive; how to be a helpless child of this maddening but still lovely universe.
Posted by bluesinger at 1:01 PM